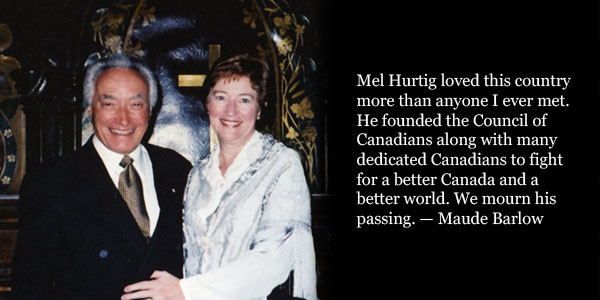 The Council of Canadians is mourning the passing of Mel Hurtig.

The CBC reports, "Mel Hurtig — Edmonton publisher, bookseller, activist and publisher of The Canadian Encyclopedia — died Wednesday at the age of 84. Hurtig died surrounded by his daughters after a short bout of pneumonia in a Vancouver hospital. Born in Edmonton in 1932, Hurtig opened the city's first independent bookstore with just $500 in 1956. By 1972, he operated three highly successful stores in the city. Patrons were welcome to socialize, sip coffee and play chess in his establishments, where he also held theatrical performances and readings. Hurtig's Edmonton book empire [later] expanded from book selling to publishing."

That article highlights, "An economic nationalist, he was a founding member of the Committee for an Independent Canada, the Council of Canadians and led the National Party of Canada."

Our first media release – which announced the formation of The Council of Canadians in March 1985 – stated, "Edmonton publisher Mel Hurtig said that the C.O.C. will be broadly based both politically and geographically and positive in its programs. Mr. Hurtig said the new organization is very concerned about the dangers of a possible comprehensive bilateral trade agreement with the U.S. [the Canada-U.S. Free Trade Agreement] and the potential harmful effects to the Canadian economy of such an agreement. Mr. Hurtig stressed that the new Council is not anti-American, narrowly nationalistic, or against all forms of foreign investment."

Today, the Canadian Press reported, "'We mourn our friend and mentor', Maude Barlow, national chairwoman of the council, posted to Twitter on Wednesday night."

Barlow also talked about Hurtig's legacy and what motivated him on the CBC Radio program Q this morning (which can be heard at the 29:07 mark here).

The Toronto Star notes that Hurtig's eldest daughter Barbara "said his political pluck lasted to the end, noting that when her youngest sister read him a headline on Wednesday about the inquiry into Missing and Murdered Indigenous Women, he remarked: 'Bravo, it’s about time.'"

Barbara and her sisters have now released a statement that says, "Canadians knew dad as our country's consummate patriot. He was a bookseller, publisher, and a politician, an author and an activist. In every chapter of his life, dad's cause was Canada and his commitment was unconditional. Dad's love of country was exceeded only by his devotion to his family and friends. To us, he was an extraordinary father; to so many others, he was an irreplaceable companion, colleague, and compatriot. We will share our plans to celebrate dad's life in due course."

We were also very honoured that the family stated, "Donations in lieu of flowers may be made to the Council of Canadians [click here to do that] – or to the political party of your choice."

To read more about the extraordinary life of Mel Hurtig, please see The Canadian Encyclopedia biography of him.