NAFTA: Last chance to stop this bad deal | The Council of Canadians

Now might be our last chance to make critical improvements to the new North American Free Trade Agreement (NAFTA) before we’re all locked in to its undemocratic and corporate-friendly rules – potentially for decades.

U.S. Vice President Mike Pence is coming to Ottawa on Thursday to meet with Prime Minister Trudeau and Foreign Affairs Minister Chrystia Freeland, and at the top of the list for discussion is the swift ratification of the deal.

The rush is on because Parliament is scheduled to break for summer recess in just four weeks. That gives the House of Commons and the Senate little time to study the impacts of the deal and vote.

The latest word is the Liberals intend to push the new NAFTA legislation through second reading and have it sent to committee as early as this Thursday!

In the U.S., President Trump and his administration are facing a similar short window of time to get the deal ratified. And standing in their way is increasing pressure from progressive Democrats who want significant improvements in key areas before they will agree to support it.

Right now, Democrats are pushing for the removal of specific provisions that make life-saving drugs more expensive for people and for the strengthening of environmental and labour rights.

Despite these U.S.-led efforts to make NAFTA better for people and the planet, yesterday, Minister Freeland set in motion the formal process to ratify the deal. She went so far as to say Canada will move forward full steam ahead “in tandem” with Trump and the U.S. – and I expect she’ll tell Vice President Pence the same on Thursday.

Instead, Canada should be working with Democrats – who have the votes to roadblock U.S. ratification – to ensure those critical improvements are made before we pre-emptively ratify this trade deal.

To that end, staff here at the Council of Canadians have been working flat-out to create a series of videos and factsheets that explain how the new deal adds up to a gift for corporations at the expense of Canadian farmers, our health care, and our social and environmental regulations.

The plan is to now get these videos seen widely to jolt public awareness and then mount pressure to make MPs stop, listen, and ultimately vote in favour of supporting the improvements being proposed by U.S. Democrats.

Will you take a moment now to send a message to Prime Minister Trudeau and Minister Freeland urging Canada to pause ratification?

Together with more than 30,000 Council of Canadians supporters like you, we have already forced through important improvements to the new NAFTA by mobilizing broad and relentless public pressure.

These include the removal of Chapter 11 that allows corporations to file lawsuits against our governments, removing water from the deal altogether, and getting rid of quotas that force Canada to export our oil and gas to the U.S. even in times of domestic shortage.

That’s why I know we can force through more needed improvements – but we all need to pitch in now.

Can you chip in a contribution to help?

Canada must not cave to Trump’s pressure to ratify a deal that is still deeply flawed. We need to overhaul it, not rubber stamp it. 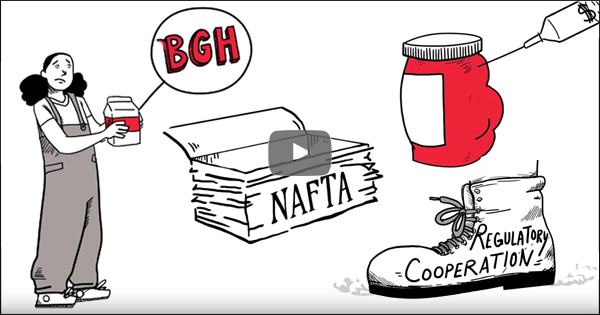 Check out the videos and factsheets.