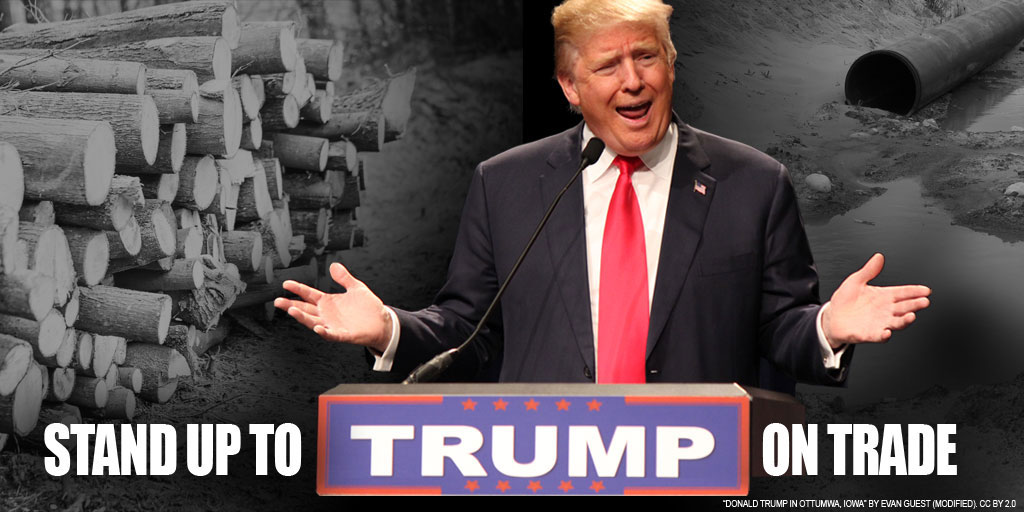 Late yesterday, the Trump administration released its objectives for the upcoming renegotiation of the North American Free Trade Agreement (NAFTA).

It did so because under the so-called 'fast-track' legislation in the U.S., it must give 30-days notice of its negotiating objectives to give Congress time to provide feedback. Fast-track also means that Congress will only be able to vote on the whole NAFTA text once negotiations are completed, it won't be able to reopen or vote down specific provisions.

Not surprisingly, but regrettably, Trump's priorities do not include removing the controversial Chapter 11 investor-state dispute settlement mechanism, nor the listing of water as a service, investment and a good, nor the disastrous energy proportionality provision which locks Canada into climate-destroying oil and gas exports rather than the necessary transition to a 100 per cent clean energy economy.

Instead, among the more than 100 negotiating objectives listed, the Trump administration will be seeking: 1) the abolition of the Chapter 19 state-to-state investment dispute resolution system, 2) the ability for American companies to bid on public procurement in Canada and Mexico, while maintaining 'Buy American' provisions in the U.S., 3) fewer restrictions on U.S. telecommunications companies potentially buying Canadian telecom companies like Rogers, Bell, and Telus, 4) stricter 'rules of origin' requirements that would likely impact the Canadian auto sector, and 5) more market access for U.S. agricultural products which could translate into an undermining of our supply management system for dairy, poultry and eggs.

As our American allies have pointed out, "The Trump administration’s NAFTA renegotiation plan fails to take the bold steps needed to replace NAFTA with a deal that works for working families. Instead, the document relies heavily on language from past, business-as-usual trade policies that have privileged corporate interests ahead of others."

Furthermore, the Trudeau government is under no requirement under Canadian law to make public its negotiating objectives. This is both wrong and unacceptable.

Yesterday, Foreign Affairs Minister Chrystia Freeland only commented, “We welcome the opportunity to modernize NAFTA to reflect new realities — and to integrate progressive, free, and fair approaches to trade and investment. When negotiations begin, we will be ready to work with our partners to modernize NAFTA, while defending Canada’s national interest and standing up for our values."

But what does that practically mean? Do we not have the right to know what Trudeau will seek or more likely trade away?

In addition, Trudeau had promised during the October 2015 federal election transparency in trade negotiations – and failing to do so is as much a broken promise as not implementing electoral reform, not setting deeper carbon pollution reduction targets, and not restoring protections for lakes and rivers across this country.

The first round in the renegotiation of NAFTA is expected to begin as soon as August 16 in Detroit or Pittsburgh.

The Council of Canadians will continue to press our demands for transparency and fairness, mobilize with allies at strategic moments (including the town hall meetings now promised by the government), and build public awareness of the harm NAFTA has inflicted.

Today was to be the deadline to let the Trudeau government – via Global Affairs – know your concerns about NAFTA. The government says it has received 12,000 written submissions. Council of Canadians supporters help generate about one-quarter of those submissions. Now the government has extended that deadline indefinitely. To send them a message via our online action alert, please click here.