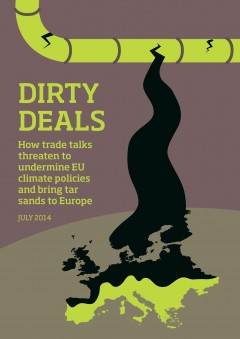 The Canadian and U.S. governments have used ongoing trade talks to push the European Union to allow devastating tar sands oil unfettered access to the European market, according to a new report released today. The report is available at https://www.foeeurope.org/dirty_deals_170714.

Urged on by the oil industry, Canada and the US have successfully delayed and potentially weakened the Fuel Quality Directive, a key piece of EU legislation aimed at reducing greenhouse gas emissions from transport fuels.

In addition to years of lobbying by the governments of Alberta and Canada and the oil industry, Canada has used threats of World Trade Organization action as well as its ongoing bilateral trade negotiations towards the Comprehensive Economic and Trade Agreement (CETA) to put pressure on the EU to remove all disincentives to imports of tar sands oil.

“The delay and weakening of the European Fuel Quality Directive once again reveals that agreements like CETA are less about trade and more about limiting the ability of governments to effectively regulate in the public interest,” said Scott Harris, trade campaigner with the Council of Canadians. “Even before it is signed, CETA is being used to water down much-needed public policy. Imagine what will happen to regulations on both sides of the Atlantic if the deal is actually implemented.”

“While other governments are trying to make communities safer, the Canadian government is using its political muscle to push things in the opposite direction so it can export high carbon tar sands oil as quickly as possible,” said Mike Hudema, climate and energy campaigner with Greenpeace Canada. “It’s astonishing that as we watch the fires spread in the Northwest Territories and the flood waters rise in the Prairies our government still isn’t getting the message – climate change is real and we need action immediately. Rather than bullying other countries into weakening their climate efforts the Canadian government should be getting its own climate house in order and dealing with the country’s number one emitter – the tar sands.”

The U.S. government has also used Transatlantic Trade and Investment Partnership (TTIP) negotiations to weaken the European policy to clean up transport fuels that would effectively curtail the import of tar sands and other dirty fuels into Europe.

“The sustained attacks by the U.S. and Canada on the European Union’s key legislation on transport fuel emissions seem to be paying off,” said Fabian Flues of Friends of the Earth Europe, the author of the report. “Europe is again failing to stand up effectively for its own climate policy. The trade agreement with the U.S. is being used as a Trojan horse to bring dirty tar sands imports to Europe’s shores. Clean fuel rules might just be the first EU policy dismantled by this trade deal, even before it is agreed.”

The EU is negotiating separate trade agreements with Canada and the U.S. – the Comprehensive Economic and Trade Agreement (CETA) with Canada, and the Transatlantic Trade and Investment Partnership (TTIP) with the U.S.

The proposed trade agreements will impact many aspects of the life of citizens on both sides of Atlantic, including food, energy, consumer goods, and financial services as well as paying compensation for the investment failures of foreign companies.

The report, Dirty Deals: How trade talks threaten to undermine EU climate policies and bring tar sands to Europe was released jointly by Friends of the Earth, Transport & Environment, the Council of Canadians, Greenpeace, and Sierra Club U.S.