Organizations from Canada, Mexico and the U.S. denounce Trump’s ‘divide and conquer’ strategy which has potentially led a three country trade agreement to being reduced to two bi-laterals.

According to the Council of Canadians Honorary Chairperson Maude Barlow: “Trump’s announcement of a trade deal with Mexico shows what we said 30 years ago about free trade with the US: putting all our trade apples in one basket would give the U.S. government and American corporations too much power over Canada. We were right!”

The United States Trade Representative has stated: “The United States and Mexico have reached a preliminary agreement in principle, subject to finalization and implementation.” According to Manuel Perez-Rocha, Associate Fellow with the Washington-based Institute for Policy Studies (IPS): “The NAFTA renegotiation has reached a Kafkaesque stage. Not only have the negotiations not been finalized, and have recently been minus Canada, but the texts remain hidden from the public.”

“We call on Canada to reject the pressure to immediately accept the trade arrangement between the U.S. and Mexico that Trump would wish to trumpet as a propaganda success in the lead up to the U.S. November mid-term elections. Deadlines such as this one are nothing more than pressure tactics to force the trade negotiators into compromises when most likely it will not be the current U.S. Congress that will deal with it,” said professor Alberto Arroyo Picard from the Autonomous Metropolitan University (Mexico), and a member of the coalition Mexico Better Without FTAs. Mr. Arroyo added: “Though the current Mexican negotiators hypocritically state that they want Canada to be part of the treaty, the truth is that it will be the incoming Mexican government that is really committed to see it happen, which also coincides with the position held by Mexican grassroots organizations.”

After the August 31, 2018 United States notification of Congress of its intention to sign an agreement with Mexico, with or without Canada, Sharon Treat, the Senior Attorney for the Institute for Agriculture and Trade Policy (IATP), stated: “A NAFTA deal without Canadian participation is not a completed deal.” With respect to Trump’s frequent tweets calling on the Canadian government to dismantle Canada’s successful dairy supply management program, Ms. Treat points out: “Rather than destroy the Canadian dairy industry, we should be learning from their example and adopting policies that successfully balance supply and demand and lift up our own farmers. That’s why family farm groups in the U.S. have spoken on the need to overhaul domestic dairy policy….rather than attacking Canada’s program.”

None of the three NAFTA governments are sharing details of the talks with the public. “We call on the Canadian government to publish any agreed upon texts right away and that these secretive talks be replaced by an authentic consultative process involving legislators and civil society” said Rick Arnold, Chair of the Council of Canadians Northumberland Chapter trade group. “Canada needs to stand up to the bullying and insults coming from the Trump White House and ensure a sustainable development end game that addresses growing inequalities that face most people in North America”. 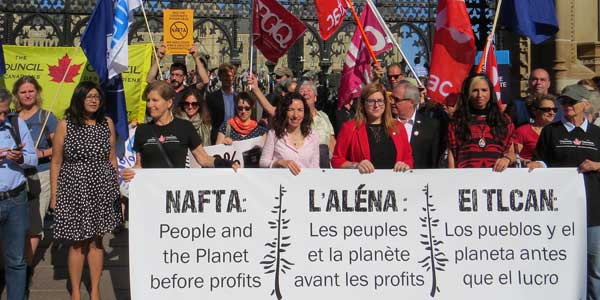