“In spite of Canada saying this will be the most worker and environmentally friendly deal ever, the same corporate interests that triggered NAFTA 1.0 are the real power behind NAFTA 2.0,” says Maude Barlow, Honorary Chairperson of the Council of Canadians. “Canada’s mining corporations, for example, with their horrible human rights and environmental practices in other communities are at the table ensuring that regulations are harmonized on their behalf.”

According to the New York Times, there will be no language to support the commitments of the Paris Climate Agreement.

Case in point: Chapter 11. This week will be pivotal for Chapter 11. Canada is defending this discredited dispute resolution system, which enables multinational companies to sue governments over changes in public policy that get in the way of profits. Canada, the most sued party in NAFTA faces $2.6 billion in outstanding cases.

“It is curious why Canada is fighting so hard to keep Chapter 11, when the U.S. is asking to get rid of it. Especially when Canada has suffered so badly from it,” says Barlow. “If anything is emblematic of corporate power, it is Chapter 11. But already, the corporate energy and mining interests are campaigning to enshrine it, as they did with the deal between Canada and Mexico.”

In addition to corporate Canada’s demands, the new demands and ultimatums from the U.S. also have a similar pattern, giving more rights to U.S.-based big business.

“Canada is now being asked to give in to Big Farm, Big Pharma, Big Data and Hollywood. This isn’t negotiation, it’s marching orders,” says Sujata Dey, Trade Campaigner with the Council of Canadians. “Canada has to stand up to Trump’s temper tantrums and not cede to U.S. big business on these points.”

Barlow is sceptical that NAFTA can be remedied, and reminds Prime Minister Trudeau that Canada can live without NAFTA.

“NAFTA 1.0 was a deal by and for corporations. But NAFTA 2.0 doesn’t look any better,” says Barlow. “There may be some marginal improvements, with labour and environmental chapters, but on the whole it’s a corporate-friendly deal that Canada would be better off without.” 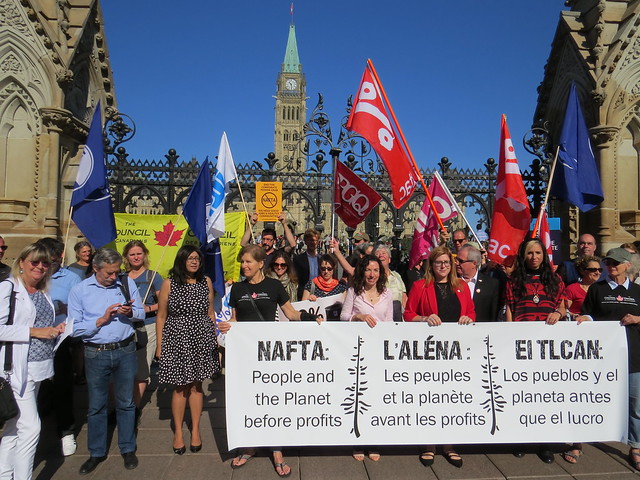