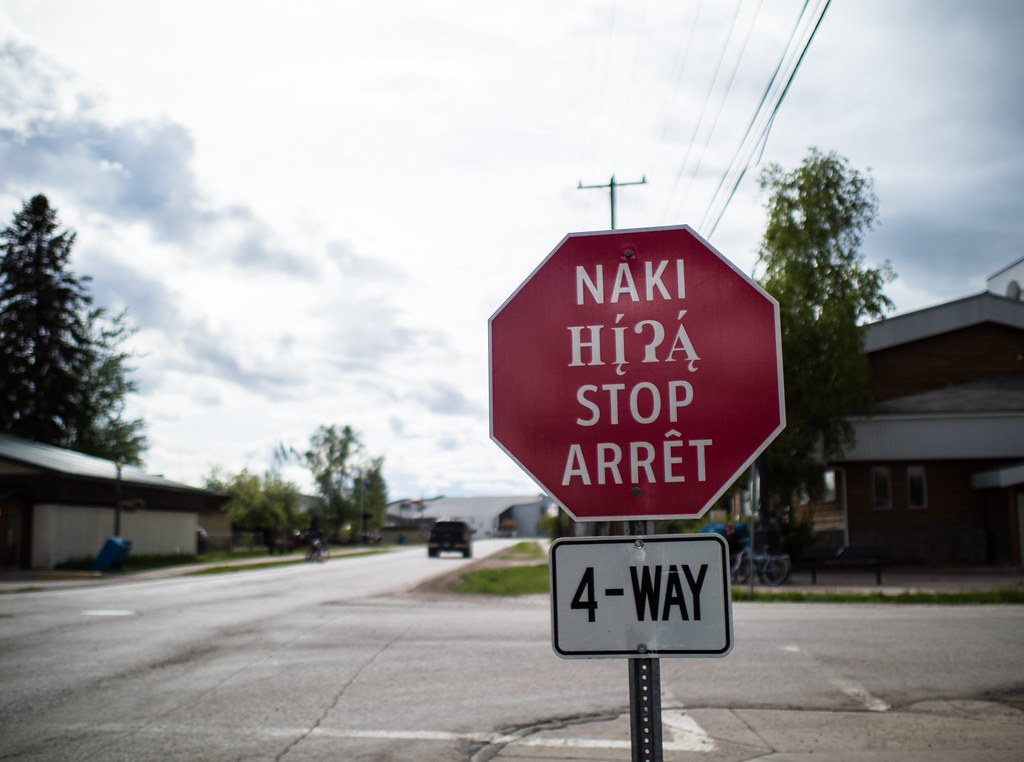 Stop sign in Fort Smith, NWT in Cree, Dene Suline, English, and French. Louis Bockner/Sierra Club BC.
Making the case for a new 260,000 barrel per day, $20 billion, 41-year-lifespan tar sands mine in an era of climate crisis requires some impressive creativity.
The Joint Federal-Provincial Review Panel hearings for Teck Resources’ Frontier Mine started at the end of September and wrapped up in Calgary in December, and we were there to ask the panel to reject the project and monitor what Teck said. Their proposal is the largest ever for any extraction project in the Alberta tar sands, and if built it would be the second largest (after Canadian Natural Resources’ Horizon Mine, which was proposed and reviewed in multiple phases).
Now that the hearings are over, the panel take a few months to decide whether to approve the project in the coming months. But this regulatory process has never rejected a new tar sands mine, so we’ve starting telling the federal government to #RejectTeck now in case the panel approves it – add your voice here.
Here are some of the wildest things Teck Resources’ lawyers told the panel during the hearings:
1. “We support action at all levels to combat climate change and we advocate strongly for efficient and effective climate action policies”
As scientists, land defenders, community organizers, religious figures, and policy analysts have been yelling for years, the continued expansion of the tar sands is fundamentally incompatible with Canada doing its fair share on climate change. This project’s life-cycle emissions alone would be equivalent to permanently adding about 10 million new cars on the road, about 60 million tonnes of CO2 a year. Counting only emissions from production, this would still be about 830,000 new cars on the road.
Teck's lawyers repeated variations of this statement frequently throughout the hearing, despite their financial and greenhouse gas modelling results relying on (A) neither Alberta nor Canada following their existing climate legislation, (b) a world where we have more than 2.7 degrees of warming and (c) emissions-reducing extraction technologies to magically come online, that despite decades of R&D, have yet to materialize.
2. Conditions on things like showing we can improve emissions performance over time, adequately restoring biodiversity, and making sure we pay for clean-up at the end of the projects’ life are “unreasonable and inappropriate”
On the final day of the hearings, Teck said the panel approving their project with conditions like this would, “put at risk the oil sand industry's ability to advance quality projects like Frontier.” We agree, but perhaps unsurprisingly come to a different conclusion. If you can’t afford to build your project and be held to basic conditions like these, you shouldn’t be able to build it at all. 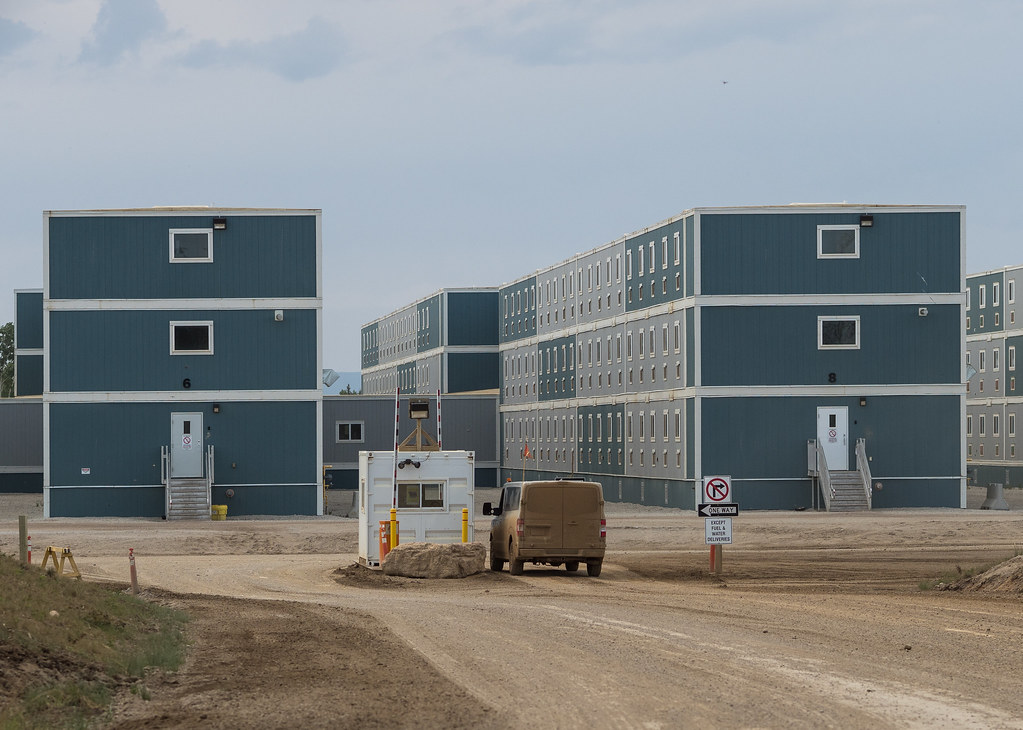 Worker housing in the northern regions of Alberta's oilsands. Louis Bockner/Sierra Club BC.
3. The Wood Buffalo National Park’s “ecological integrity is not threatened.”
This one is pretty brave of Teck, because Wood Buffalo National park has been making headline after headline this year for its ecological precarity. Its status as a UNESCO World Heritage Site is at risk, and UNESCO’s most recent assessment found 15 out of 17 environmental indicators are in serious decline. As Karey Brooks, a lawyer for Mikisew Cree First Nation mentioned during the hearings, UNESCO’s report found 19 causal linkages between this ecological decline and the tar sands industry. Teck mine would be by far the closest project yet to the Wood Buffalo National Park yet, so the prospects for the park if it is built are daunting.
Teck justified saying the park is doing fine with a straight face by citing Parks Canada and IUCN literature from 2014, despite both of those organizations having updated their assessments to reflect the parks’ poor ecological health since then.
4. We do not want to have to follow the spirit of the agreements we have signed with impacted First Nations.
Teck made a point of asking the panel not to have to follow the water withdrawal limits that Athabasca Chipewyan First Nation has asked for, despite signing an agreement with that asks for this. During the hearings any of the nations who signed agreements with Teck have asked that their concerns go forward as formal conditions and not recommendations because of companies’ histories of violating regulatory panels’ recommendations.
It’s also important to note that while many of these nations' leaders have signed participation agreements with Teck for this project, some stated they felt they had no choice because their efforts to stop tar sands developments on their lands have always been ignored.
As Eriel Deranger of Athabasca Chipewyan First Nation wrote in the National Observer, “The consent process that these energy companies claim to make (Teck and Kinder Morgan) are done through intimidation and coercion which brings our leaders to make ill-informed decisions or wears them down through continued denial of rights over the ‘national interest’ and jobs. What is happening in my community is a perfect example of this.”
There are also nations downstream from the project who are directly impacted who Teck would not consult with. As John Malcom of the Original Fort McMurray First Nation and Clearwater First Nation said on the last day of the hearings, “Alberta is not a friendly place to the north. The bands that we mentioned earlier, Fort Smith, Deninu Kue, and Fort Fitzgerald, Fort Smith bands, they're feeling the bad impacts. The wind blows pollution, the water flows pollution, sewage from the plants, lack of fish habitat. They're feeling it. Whether or not the regional study area doesn't go that far or because Teck feels it's not impacted, they're not happy. In the Northwest Territories, they're not saying good things about Alberta. Alberta is not a good neighbour.”
5. NGO evidence should be ignored because of their ‘advocacy agenda’
Here I’ll just use one long quote from Teck: “I think it's important to clarify Teck's position regarding the submissions of three parties, SierraClub BC, Council of Canadians, and The Wilderness Committee. We'll refer to these groups together as the "ENGOs". These three groups raise several concerns regarding environmental impacts, climate change, and project economics and viability....These groups all appear to oppose any type of fossil fuel whatsoever with little regard for recognizing the complexities of producing a much-needed resource that is in high demand around the world. They fail to identify specific project-related issues, and their concerns should be given little, if any, weight as a result.”
To be clear, the idea that we can’t keep expanding the tar sands isn’t an opinion, it is well-established climate science.
Teck added, “all these factors together illuminate a picture of bias upon bias upon bias being presented to the Panel as independent and objective facts.” If NGOs with a mandate for public good are biased, I’d hate to be the one to alert Teck of the biases of a for-profit corporation whose business plan is dependent on us plunging the world into climate crisis.
Teck also attacked NGO’s expert witnesses’ credibility and credentials instead of their arguments, including Tom Sanzillo, a director of the Institute for Energy Economics and Financial Analysis and former first deputy comptroller of New York State, and Regan Boychuk of Reclaim Alberta, the former research director for the Parkland Institute. As Boychuk noted in response, this is a plainly desperate tactic: “if the law is against you, concentrate on the facts; if the facts are against you, concentrate on the law; and if both the facts and the law are against you, denounce your opposing counsel.” 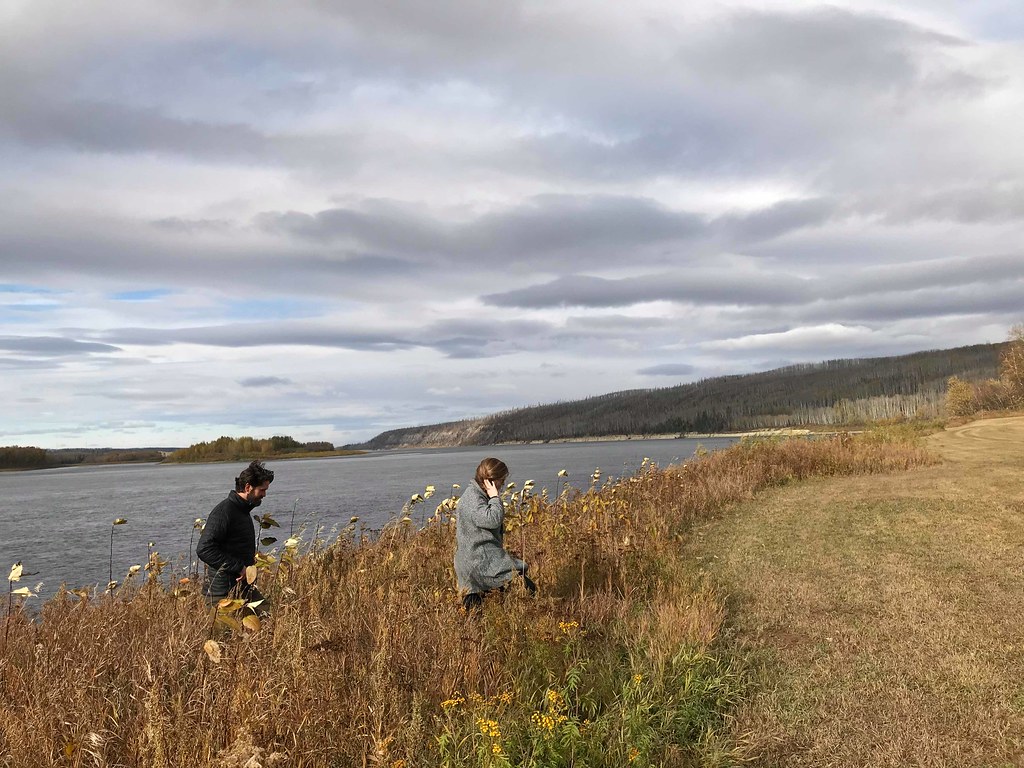 On the Athabasca River, just outside the Teck Frontier hearings in Fort McMurray.
6. Oil is going to rise to $95 a barrel and stay there, and the Keystone XL, TMX, and Line 3 pipelines will all get built.
Teck making enough profit to pay their royalties, create the jobs they say they will, and pay for clean-up all depend on the risky assumptions above.
Even in their maximum-profit scenario they do not have adequate funds set aside for clean-up. As Barry Robinson, lawyer for the Oil Sands Environmental Coalition said, they have “enough for half a dozen people with trucks and equipment. That's what Teck is committing to for decades after the project. That's all.”
7. We invented the walkie-talkie, and that means we can figure out how to make the tar sands climate-friendly.
Teck pointed to their “record of innovation,” including inventing the walkie-talkie, to argue that they will be able to invent new technologies to reduce emissions over time. Despite tar sands companies promising this for decades, we have not seen results and the average emissions intensity from tar sands production has actually gone up as the easiest-to-reach deposits get extracted. And now that international oil majors have largely pulled out, there is less money to be put towards research and development
As the Oil Sands Environmental Coalition pointed out, Teck has not even built the cost of technology to reduce GHG emissions into their project engineering, their project costs, or their project benefits assets. And all of this ignores that even if the tar sands do get a little cleaner, they will still not be compatible with a livable climate.
8. “When things don’t go to plan, we consistently have shown that we've committed to do the right thing by being open, by being transparent, and remaining responsible. We don't walk away.”
I do not think the Confederated Tribes of the Colville Reservation in Washington state would agree with this statement from Teck. They recently won an $8 million statement after fighting Teck in court for 11 whole years. As the Narwhal reported, “a US judge ruled it is ‘inconceivable’ Teck did not know its Trail, BC lead and zinc smelter — one of the largest in the world — was contaminating transboundary waters destined for Washington state.” The smelter was leaking 400 tons of toxic smelter waste a day.
Teck Resources was found guilty of dumping 9.97 million tons of contaminated waste into the Columbia River, a transboundary river that runs from British Columbia to Washington State. Carol Linnitt / The Narwhal

And in various blog posts dating back to 2012, we have noted that Teck operates the highly-polluting and water-intensive Carmen de Andacollo copper and gold mine in Chile; that its existing and proposed coal mines in British Columbia have prompted concerns from the US Environmental Protection Agency about the pollution of Kootenai-Koocanusa watersheds; and that it owns a copper and zinc mine in central Newfoundland that could use power from the Muskrat Falls dam that’s violating Indigenous rights.

It was hard to choose just eight statements from more than two months worth of testimony – Teck made some pretty questionable claims on everything from whooping cranes to job creation to tailings ponds. We are still hopeful the review panel won’t approve this project, but we need you to send an email now asking the federal government to #RejectTeck in case they do.