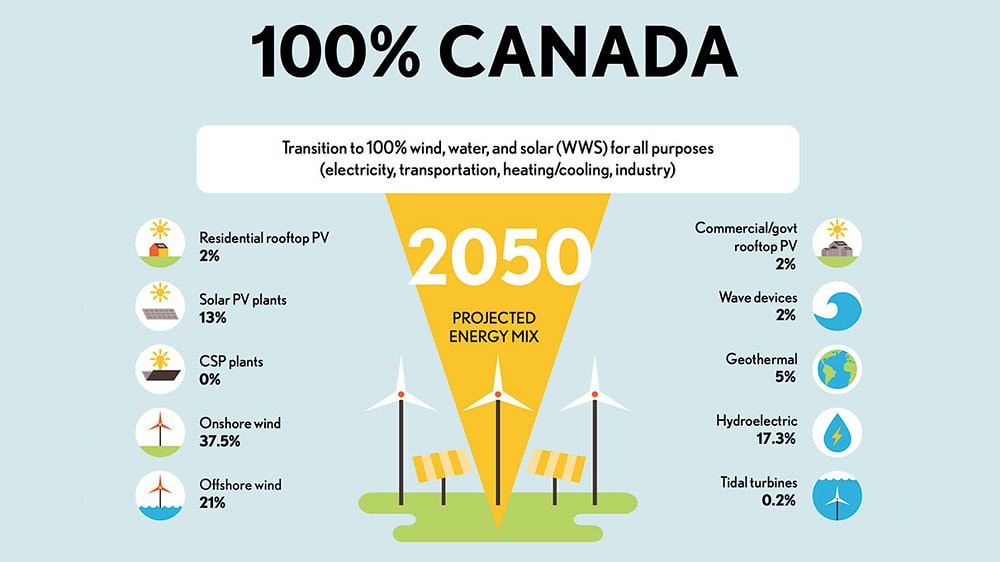 The Solutions Project is a research initiative out of Stanford University that models pathways for jurisdictions around the world to transition to 100% renewable energy by 2050 or sooner. Above is a summary of their model for Canada.

On December 2nd, Rachel Notley announced her government will cut oil production by 325,000 barrels per day in early 2019. She cited the measure as a solution to Alberta’s oil price differential, which her government says is costing Alberta $80 million a day. (It is worth noting this number, from a Scotiabank report, has been called into question for incorrectly assuming every barrel Alberta exports is exposed to maximum losses from higher transportation costs.)

If we were having honest discussions about climate change or the economics of the oil sands in this province, Notley's announcement would be the beginning of a managed and just transition away from the sector and towards renewable energy and other low-carbon sectors, not a temporary cut. From a scientific point of view, it is honestly wild that in 2018 the Alberta government is willing to cut oil production to support the industry but not to avert climate catastrophe. 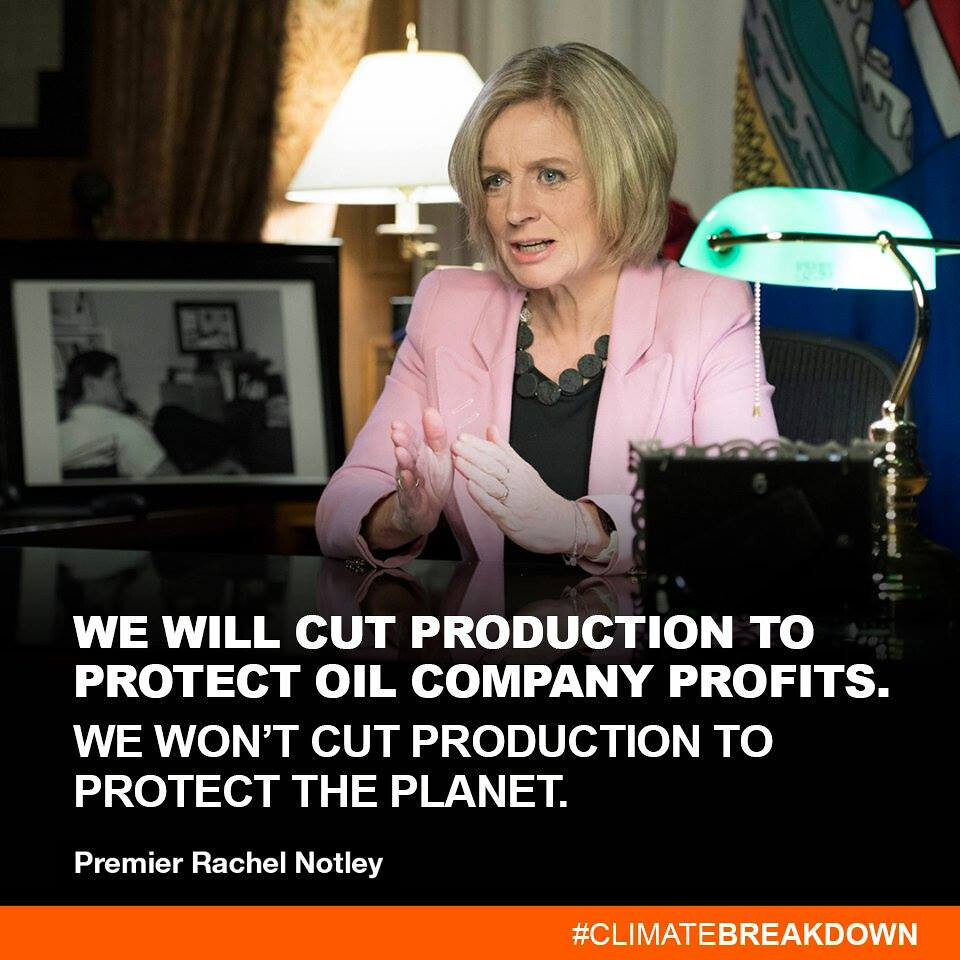 But politically, it is not surprising at all. Rachel Notley has tied her re-election firmly to an unbuildable pipeline project and blind support of the oil sands, and it is a short-lived fluke of economics that right now supporting oil company interests looks like what effective climate action would.

I think it is useful at this point to consider how we got here, and what it would take to actually create the circumstances where a supply cut like this is part of a just transition away from the oil sands.

How we got here

It is in this absence of any meaningful climate action that the movement to stop new oil sands pipelines has sprung up and it has been overwhelmingly effective. Diverse coalitions using a variety of tactics have stopped or stalled all but two of seven largescale (over 150,000 barrels per day) proposed pipelines for oil sands expansion since 2005: Northern Gateway, Keystone XL, Energy East, Line 3, and the TransMountain Expansion. Enbridge's Line 67 and Line 9b have been built largely due to regulatory loopholes that afforded them less scrutiny with respect to environmental safety and Indigenous rights. And while rail transport of Alberta bitumen has expanded dramatically, the new rail that has come online or is set to still pales in comparison to what these new pipelines would have added.

These pipeline-stalling efforts are a large part of the reason that there is a supply glut in the oil sands right now, and why Notley has called for a temporary cut. (Though again, it is important to note that this glut is not as economically damaging as Alberta's UCP, NDP, or media would have us believe.)

But this "climate policy from below" is not enough for us to make adequate progress. On top of these powerful 'NOs' we need to have a more concrete and hopeful vision to push people towards.

How we get to an actual just transition

Rachel Notley's government could have told a different story, that we need to be planning for the world to move on from oil, instead of trying to out-Kenney Kenney at squeezing out as many barrels as we can. This has meant adequate climate action continues to be outside of what's politically possible in this province. But I do think this is a reality we can shift. Whenever I have talked to other Albertans in person about the need to transition, what that transition could look like, and how we can protect workers through it, they are overwhelmingly open to it.

So in addition to keep-it-in-the-ground efforts to curtail oil sands expansion, we also need to knit all the climate solutions we know into a more compelling and tangible vision. We need to call more loudly than ever for funding for renewables, energy efficiency, health, education, ecological agriculture, and other low carbon sectors. We need to call for worker retraining, clean up of abandoned oil projects, making our cities walkable, bikeable & transit-friendly, and upholding Indigenous rights. We need to call for a Green New Deal as the progressive wing of the U.S. Democrats, amongst many others, are calling for these days.

If we do it right, the next time the Alberta government calls for a supply cut, it will be part of a managed transition plan to a better future, and not a questionable strategy to keep a dying industry afloat.