International Day of Action of Rivers is March 14

The Council of Canadians
6 months ago

The Council of Canadians Winnipeg Chapter

Several decades ago, Manitoba Hydro was granted an 1973' CRD Interim Licence which allowed operation and fluctuations of the Churchill River Diversion by two feet over a twelve-month period. The rise in water levels would have been similar to naturally occurring fluctuations in the river. Just six years later, in 1979, Manitoba Hydro deviated from the initial license, into what become operationalized as the Augmented Flow Program (AFP). The AFP allowed an additional six inches of flooding, one foot of further dewatering, and 4.5 feet of lake fluctuation. Recently, Manitoba Hydro applied for permanent approval of these deviations, and the provincial government is expected to make a decision on the request shortly. The effects of permanent deviations of this kind would be significantly harmful to the local ecosystem.

The large-scale impacts from dams and reservoirs raise questions about whether hydroelectric projects can be considered environmentally sustainable.

Flooding vast areas of land has effects that contribute to large releases of greenhouse gas emissions. In oxygen-poor environments, methane-generating microbes feed on decaying algae. As rivers continue to flow into reservoirs, microbes are fed organic material and sediment from upstream but also nutrients like nitrogen and phosphorus from agricultural activities that drive their growth. Boreal peatlands, like those in Northern Manitoba, have a large amount of biomass and soil carbon and methane that could produce emissions for decades to come if flooded. Significant drops in water levels increase the amount of methane released into the atmosphere and accelerate planetary warming. More concerning is that 79 per cent of the emissions are methane, which is 36 times more potent than carbon dioxide. With the melting of the permafrost, now, more than ever, we need to consider the climate implications for any energy decision we make.

Here is a February 2021 Google Earth shot of the South Indian Lake area.

The pristine, untouched lakes look black. The rest is the result of Manitoba Hydro’s flooding with no regard for the environment. It’s murky from sediment. (Note the scale) The mercury levels can be assumed to be at a toxic level in that water. 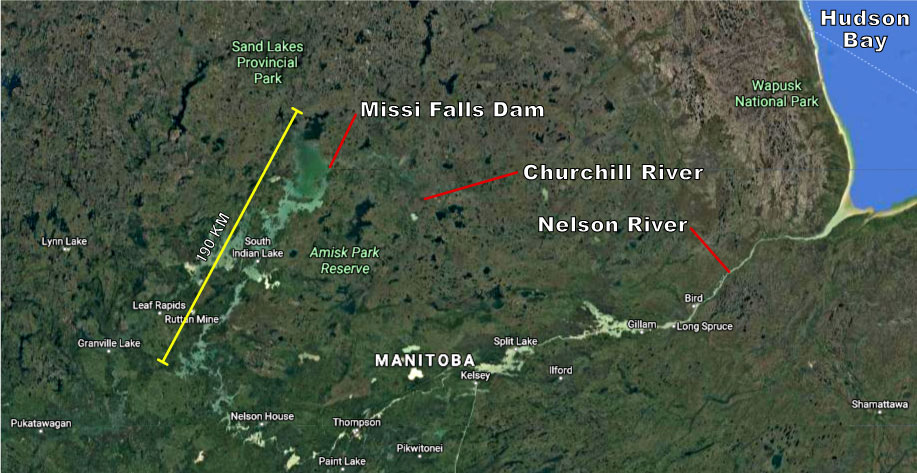 South Indian Lake is on the left, The Missi Falls Dam is at the top right of the Lake. You can’t see the Churchill River below the dam because there is virtually nothing left of it. You can follow the polluted water south then NE into the Nelson River.

Explanatory notes by Jim Senka, a retired biologist who spent most of his career in the field of environmental studies and enforcement with both industry and Government (Federal and Provincial). He lived and worked at South Indian Lake for 3 years prior to Manitoba Hydro devastation of the area. During his sojourn at South Indian Lake he developed a deep respect for the people of the area.

There can be significant variations in how large-scale reservoirs impact local ecosystems. Additionally, a warming climate will affect different regions differently. Scientists are increasingly investigating how macro climate trends, like the thawing of the permafrost, will impact local environments, development, and communities. It is a concern for the O-Pipon-Na-Piwin Cree Nation that the provincial government and MB Hydro portray hydro eclectic power as “green”. GHG needs more specific analysis with regards to the long-term impacts from the CRD and AFP.  In 1996 Dr. David Suzuki stated  “The CRD is the largest experiment of its kind in Canada, perhaps the World, no one can say with any certainty, what will happen.” After 25 years, Indigenous and traditional knowledge holders are sources of information and management practices specific to the local context. It has increasingly become apparent that land and water management and biodiversity conservation require the incorporation of Indigenous philosophies and actionable practices.

Another concern about Manitoba Hydro’s request relates to the safety of the food chain and food security for river communities. Flooding releases mercury which is normally found in soils and produces a powerful neurotoxin when delivered to microbes and bacteria. Boreal wetlands flooded to form reservoirs become even larger sources of methylmercury because the decomposition of vegetation and peat increase methylmercury production.  Studies have been finding greatly elevated methylmercury levels in predatory fish for 20-30 years in the boreal reservoirs of both Finland and Canada. This can have long-term and detrimental effects on both wildlife and human health.

The Wa Ni Ska Tan Hydro-Impacted Communities Alliance (WHA) is made up of over 25 First Nation and Métis communities with representation from leadership and community members, 23 researchers from 11 universities, and over 20 environmental and social justice NGOs and legal firms.  On November 30, 2020, the Wa Ni Ska Tan Alliance said in a letter to Minister of Conservation and Climate Guillemard:

“As an Alliance we have been documenting the many adverse impacts of hydro development in Manitoba, which are environmental, economic, cultural, and social in nature. The construction of mega-dams throughout Northern Manitoba and the accompanying ‘man camps’ have resulted and are still resulting in rape and sexual assault, racism, substance abuse, displacement and relocation of entire communities, the loss of traditional livelihoods, suicide, environmental degradation caused by construction, hydro corridors, fluctuating water levels, and flooding. The same environmental degradation leads to boating and snowmobile accidents, injuries, and deaths. This is far from an exhaustive list, but these impacts give you an idea of what happens when a crown corporation is allowed to operate with limited accountability and little to no meaningful consultation with the communities they are impacting.”

Rivers provide clean, flowing waters for ecosystems, wildlife, and human communities. In recognition of the International Day of Action for Rivers (Sunday, March 14, 2021) please join us in saying NO to the permanent Augmented Flow Program. Everyone should have a say in decisions that affect their water. It is time we stand up for these rights and for those who fight to protect them.

Please sign the petition, already signed by over 23,000, calling on Sarah Guillemard, Minister of Conservation and Climate, to reject Manitoba’s Hydro’s request for a permanent deviation to the Churchill River Diversion’s Augmented Flow Program.

Analysis by The Council of Canadians