A most unpublic 'public hearing' on the TPP 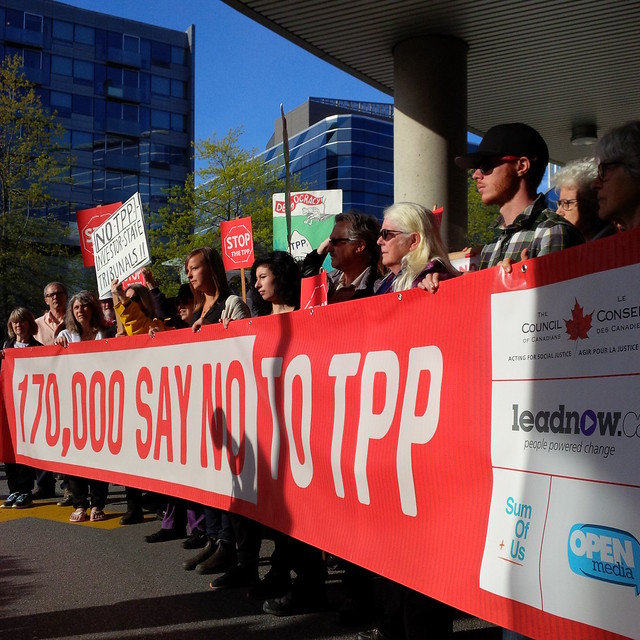 The House of Commons standing committee on international trade landed in Richmond (Vancouver) today for supposed 'public hearings' on the Trans-Pacific Partnership (TPP).

The public that came out to today's hearing had to provide photo identification, be signed in, have their bag searched, and were frisked (by a male security guard).

There were at least three plainclothes RCMP officers and ‎at least another three undercover police officers. When asked, the RCMP could not say whether this was normal practice or not for a public hearing.

The 16 foot Jumbotron was not allowed near the hotel (where the hearings were taking place) and instead was pushed a full block away where it wouldn't be visible to Members of Parliament or even the general public.

There is also the concern that the hearing took place at an airport hotel and not downtown at an easily accessible location. An official said that all the downtown hotel rooms were already booked and not available to them.

Beyond that, the standing committee booked a relatively small room for the hearing that had a seating capacity of less than 60 for the public.

At one point, when the public hooted at a comment made by an industry spokesperson in favour of the investor-state dispute settlement (ISDS) provision in the TPP, the committee chair said it would be a shame if this meant the speakers list would have to be cut short (the few opponent witnesses weren't scheduled until later in the day).

At the rally outside of the hotel prior to the start of the hearing, we were told than 175 people had applied to speak and had been rejected or simply received no response back (this was the experience of a British Columbia-based Council of Canadians Board member who had wanted  to present to the committee today).

All in all, the parliamentary committee must do much better than this if the public is to feel welcome and heard.