PEI, vote yes on proportional representation | The Council of Canadians

Folks in PEI may have seen the following email sent by the PEI Chapter this morning: 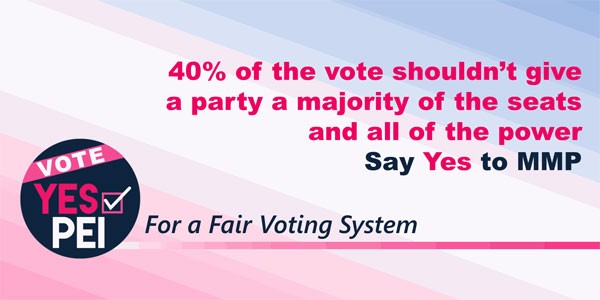 This doesn’t leave much time to get informed on all of the issues you care about and to learn how mixed-member proportional representation (MMP) might benefit you as an individual and our province as a whole, so our Council of Canadians PEI chapter thought we’d pull together something to help you!

Watch this 24 second video on the breakdown of votes versus seats for the past several provincial elections.

Vote Yes PEI has outlined the benefits of MMP and the shortcomings of our current first-past-the-post electoral system. Read more and watch one of several public debates on electoral reform.

Under MMP, politicians are motivated to share power because parties can’t win false majorities. It increases the fairness of the election outcome because every vote counts towards the result, enabling people to vote their conscience and not feel pressure to vote strategically. And if you prefer one candidate locally but would like a leader from a different party to lead the province, this is the electoral system for you!

The results of the referendum vote on April 23 will only be binding if a solid majority agrees one way or the other (details here, section 4, page 6), but all parties have publicly stated they would implement MMP if it achieves the needed support from Island voters.

Water and climate justice issues
Along with playing a big role in the Vote Yes PEI campaign, members of the PEI Chapter of the Council of Canadians are highlighting other important election issues. Chapter members recently worked in coalition to host a Leader’s debate on the environment.

At the debate, concerns were raised around monoculture (growing primarily one crop) and soil depletion. Parties were called on to enshrine the right to a healthy environment into law (Charlottetown and Stratford municipalities have done this) and commit to transitioning to 100% clean energy by 2030. People are also calling for greater water protections for the Gulf of St. Lawrence, around the issue of high-capacity wells, and in projects like the Northern Pulp Mill or Alton Gas, both of which are located in Nova Scotia.

Monoculture and industrial agriculture overall as an approach to farming have been used for decades, leaving Island farmlands seriously depleted of organic matter. The implications are dire for the economy, tourism, fisheries and the Island way of life. We are advocating for significant increases in the Island’s soil organic matter, reduction/elimination of nitrate overload, sedimentation and the elimination of fish kills. These critical changes will contribute to clean and safe water for current and future generations.

As a Council of Canadians supporter, we know that you take meaningful action throughout the year to make your community and the world better – and there may be no more effective action you can take than casting your ballot on April 23 to vote for your Member of the Legislative Assembly (MLA) and to vote yes to MMP.

To keep updated on our Chapter’s work, we invite you to follow our Facebook page and join us for one of our monthly meetings. Our next meeting will be held tomorrow, April 17 at 5:00 p.m. at the Voluntary Resource Centre in Charlottetown (call 902-368-7337 for more information or to confirm).

The PEI Chapter of the Council of Canadians will also be hosting a presentation and facilitated discussion on Mixed Member Proportional Representation this Thursday evening (details TBA but will be posted on our Facebook page), so if you have questions or would like to be a part of the conversation, please join us and bring a friend!

Thank you for all that you do.