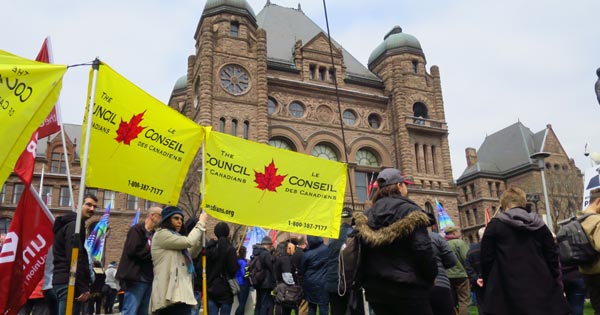 You’ve likely heard that Doug Ford has tabled his first budget bill. In it, his PC party proposes deep cuts to important government services that will undermine support for the most vulnerable people in Ontario.

If the Bill passes as written, the divide between the rich and the poor in Ontario will widen significantly and the negative impacts will last far longer than the next three years.

Are you feeling overwhelmed by the constant onslaught of budget cuts and bad government bills? You are not alone. The good news is, together, we can stop this.

The Council of Canadians has built a new tool you can use to directly call in your opposition to these cuts with the click of a button. If your MPP is Progressive Conservative, we'll connect you by phone directly with their office. If not, we’ll connect you with the office of Health Minister Christine Elliott.

When we asked Council supporters like you to call Minister Elliott’s constituency office back in February, over 900 of you did – so many that she disconnected her telephone line!

Just a few days ago, I was at Queen’s Park with thousands of other people, including Council of Canadians chapter activists and supporters, rallying in opposition to these cuts. And I will tell you we won’t give up fighting the Ford government’s regressive and destructive agenda. Public activism has forced the government to back down more than once already – and together with your support we can do it again!

The Ford government is threatening to cut public health funding in Ontario by more than $200 million per year. Investing in public health programs prevents serious health problems, which saves lives and even saves money in the long term. Cutting these public health care dollars makes no social or economic sense.

And in real dollar terms, this budget will result in a funding cut for health care services – at the same time as our hospitals are threatened by the mega-mergers and privatization that the so-called “People’s Health Care Act” encourages.

We must challenge MPPs to oppose these dangerous and hurtful cuts. Specifically, the 73 Progressive Conservative MPPs must step up and amend the budget bill so that it protects the health and well being of all Ontarians. Did you know that 23 Conservative MPPs won by a small margin – receiving less than 10% more votes than the runner-up? All but one of them are first time MPPs. We must hold them to account as individuals for the actions and policies of their party.

In the coming days we will expand our focus to some of the other draconian cuts coming in the Ford government’s proposed budget. We will need your help to ratchet up the pressure on individual PCO MPPs and the relevant Ministers on those issues to ensure amendments are made to soften the massive blow this budget will have.